This is how I make these tassels. I used Aurora 2 ply silk for the tassels and Tanja Berlin's Japanese gold K4 (beautiful gilded silver thread!) 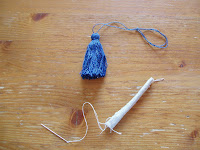 Make a basic silk tassel and a roll of linen 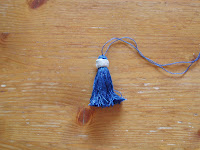 Wrap the linen around the tassel head 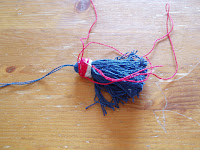 Wrap a silk thread around the linen core and attach with tiny stitches. And have a lot of patience! For me, this feels more like sculpure than embroidery :-) 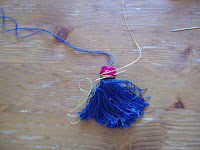 Wrap the gold thread around the tassel head and attachit with tiny silk stitches. 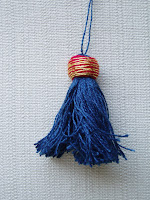 The finished tassel
Posted by Machteld at Monday, April 30, 2007 0 comments

Another technique is that of “embroidered braids”. The technique is described by Frida Sorber (Ceulemans, 1988, in Dutch) and she calls it “lussenvlechten”. I haven't found an English translation yet, so I just call it “embroidered braids”, because that's what the technique is all about. Some authors present descriptions of pouches, and seem to try to describe this type of braided finishes. In his embroidery manual “A stitch out of time” Wymarc, for example, describes his observations of the finishing of the German14th century pouches in the Victoria & Albert as follows: “The seams of the bag are covered with a decorative stitch. The stitch is composed of alternating colors, red and what might have once been gilt. I cannot be sure how the stitch was done, but I have re-created it using two needles (one for each color) and threading each color up through the previous stitch and back down, in a kind of double running stitch.” (p 41) Schmedding (1978) describes the finishing of a Swiss 15th century purse as follows: “Alle Kanten sind mit Grünen Seidenzwirnen und Goldfäden (...) in einer Art Flechttechnik befestigt.” p 190

It seems to have been quite common technique in the European mainland in the 14th and 15th century. You can find examples of purses finished with embroidered braids in these books and/or musea:

Some conclusions drawn from the literature discussed above and my own observations of purses in Maastricht and Zürich:
each seam is covered with a braid
use contrasting colours in silk or silk and gold thread
tassels are attached over the seams

This is how I apply the technique: 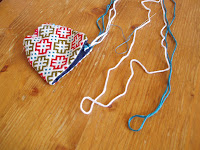 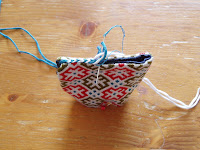 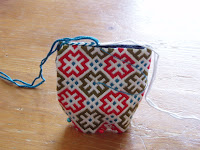 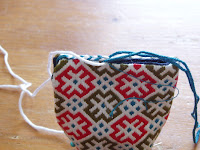 pull loop B through loop A and attach loop B 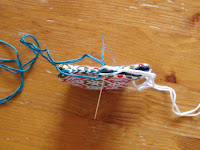 pull loop A through loop B and attach loop B 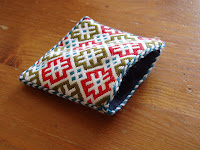 cover all sides
Posted by Machteld at Sunday, April 29, 2007 2 comments 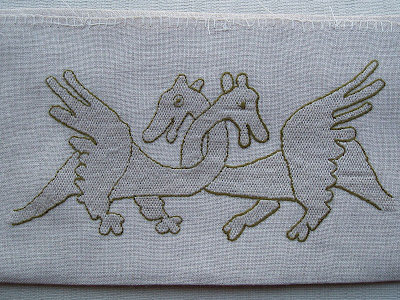 This is "sketch" for the Feldbach tablecloth.

This type of linen is quite fine/ tightly woven. It can be used very well for “free style” stitches (e.g. stem stitch), but it is less suitable for counted work (e.g. brick/ satin stitch). Jenny Schneider describes the thread count of a number of embroidered Swiss linen tablecloths:

This type of linen is quite “loose”. I think a thread count of about 14/14 or 15/15 is suitable for a tablecloth that combines both counted and “free style” stitches.